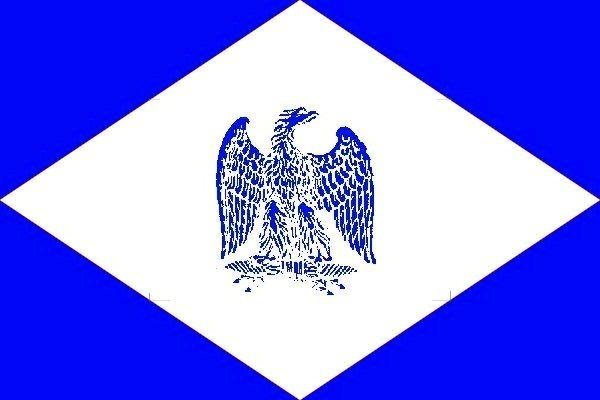 ON NAPOLEONIC IDEAS
BY
NAPOLEON III, EMPEROR OF THE FRENCH 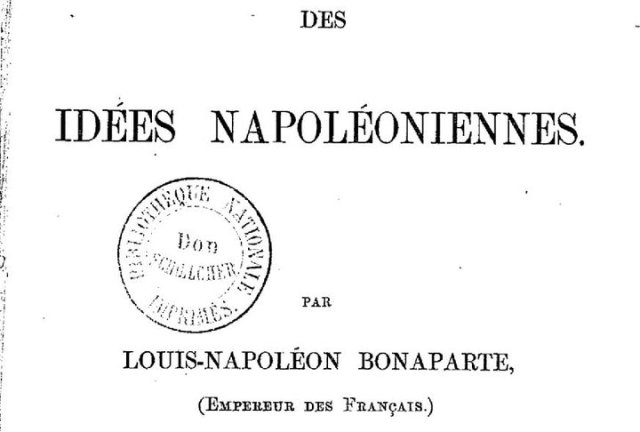 Translated from the French

by Paul-Napoléon Calland, President of the Bonapartist Movement, and published in French and English in honour of the two hundred and fiftieth anniversary of the birth of Napoleon the Great, on the Fifteenth of August, 2019.

The finances of a great state, ought, according to the Emperor, to provide the means of meeting the exigencies of extraordinary circumstances, and even of the vicissitudes of the most obstinate wars, without recourse to the imposition of new taxes, the settlement of which is always difficult. His settlement consisted in having a large number of taxes which pressed lightly upon the people in ordinary times, and of which the percentage was raised or lowered according to public need, by means of additional centimes.

It is well known to how many abuses the collection of taxes was subjected before the 18th of Brumaire, and the treasury possessed at that epoch only 150,000 francs. The dividends and pensions of the State were paid only in paper, which was at a considerable discount. Payments into the treasury were made in more than forty different kinds of things. It was impossible to make up a budget.

At the commencement of the Consulate, Pitt, our terrible adversary, thought he saw in the deficiency of money and credit the near ruin of France. He did not know all the resources within the reach of a skillful and strong government. One year sufficed for Napoleon, after the 18th of Brumaire, to regulate the collection of contributions; so that, whilst abolishing all violent processes, he met the expenditures, diminished the taxes, restored a metallic currency and held three hundred millions of francs in securities. 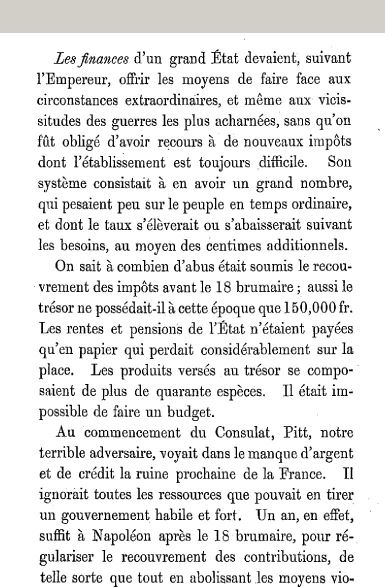 “Finances founded upon a good system of agriculture never fail” ; these were the words of the First Consul (8). The facts have proved that he was right.

By the order and regularity which he introduced into the administration and into the budgets, he revived credit. He favoured the creation of the Bank of France; but while he rendered it independent of the government, he reserved over it a power of control. He required, not that it should lend him money, but that it should afford facilities for realizing economically the revenues of the State, at convenient times and places. He showed, constantly, a disposition to come to its assistance in moments of difficulty.

“Notwithstanding the bad spirit and the distrust with which certain governors of the bank are animated”, he said in 1805, “I will, if necessary, stop the pay of my soldiers to sustain the bank”. It was his intention to establish branches of this institution in all the great cities of France. 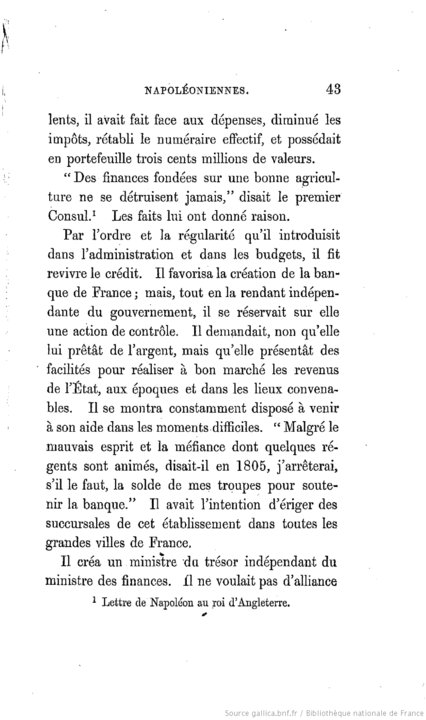 He created the office of minister of the treasury independent of the minister of finance. He did not wish an alliance between the bank and the treasury, because he thought that a simple movement of funds might disclose a secret of State. One of the most important innovations which were introduced into the treasury, was the keeping of accounts by double entry.

France ought to rejoice that the system of borrowing, which at this time weighs so heavily upon England, was not put in practice under the Empire. Napoleon had settled upon different principles, in limiting by a special law the sum total of the public debt to eighty million francs of annual dividends.

Among the improvements which ought to be credited to the Empire is the law which required receivers-general, notaries, and stock-brokers to give bonds. For a new government it was essential that the price of public stocks should be maintained in a progressive state of improvement; and the natural consequence of this necessity was a right of police and surveillance over those who, speculating only upon the rise and fall of public stocks, might have an interest to cause them to fall. The enlightened investigations of the Emperor advanced so far as to cause the tariff of annuities to be rectified, because not in accordance with the calculation of probabilities. 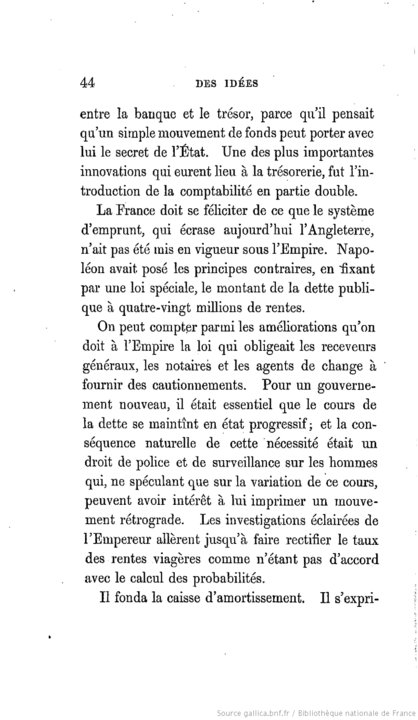 He established the sinking-fund, and expressed himself thus on that occasion : “It is said that a sinking-fund should only be a machine for borrowing; that may be true; but the time has not come for France to found her finances upon loans”. He created a “caisse de service”, which was charged with the principal duty of effecting with rapidity the local application of the receipts to the expenditures in the départements. He opened accounts current with the receivers-general.

It was his intention to create “caisses d’activité”, the increasing amounts of funds belonging to which would have been consecrated to works of public improvement. There would have been a “caisse d’activité” of the Empire for national works, a “caisse” of the départements for local works, and a “caisse” of the communes for municipal works.
In 1806, tolls and road taxes were abolished; and a law authorised the levying of a tax upon the entry of goods, in all cities in which the civil hospitals had not sufficient revenues.

The Council of Liquidation, instituted in 1802, ceased its labours on the 30th of June, 1810. It had liquidated all the debts of the State; that long-continuing open wound of the Revolution, as Monsieur Thibaudeau expressed it, was at last closed (9). 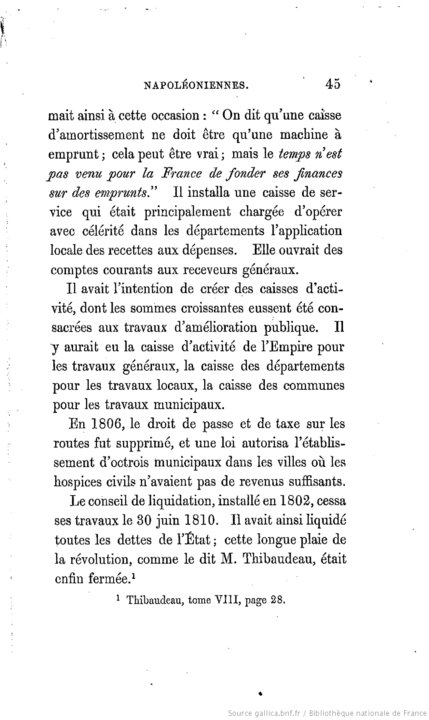 The Emperor estimated that France needed a budget of 800,000,000 francs for a state of war, and of 600,000,000 francs for a state of peace. The budget, under the Empire, never exceeded the above-mentioned figures, except after the reverse of Moscow; even then, in spite of war, it was 400,000,000 francs less than that with which twenty-four years of profound peace have burdened France. The Emperor did not expend for his own uses half his civil list; he employed the excess in forming a reserve fund, or in executing public works, or in assisting manufactures. In 1814, all his reserves were consecrated to carry on the national war.

A good system of settling accounts is the indispensable complement of a good system of finances. The constitution of the Year VIII had preserved a commission of control to sit in judgment upon accounts; it was not equal to the immense work accumulated upon it. From 1792 to 1807, of 11,477 accounts, the commission had passed upon only 8,793 (10). The Emperor, anxious to regulate everything, established the Court of Accounts, which brought up the arrears of this important branch of the public service. 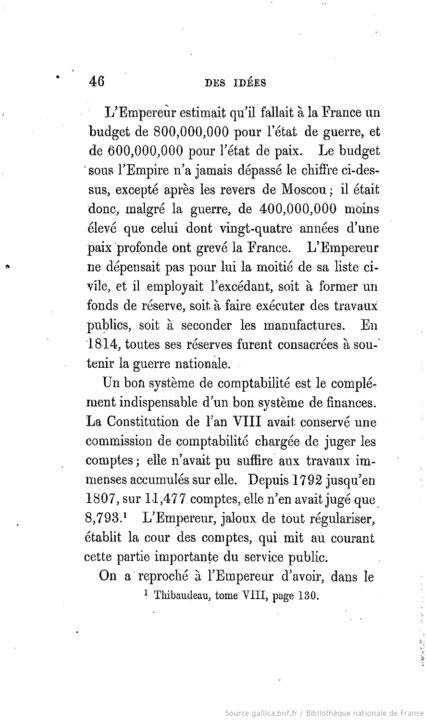 The Emperor has been reproached with having, in adjusting the taxes, too much favoured landed property. It was his opinion that, during times of peace, it was best to husband the resources of direct taxes, because these alone in time of war support all the burden; and that it was best to take advantage of the activity which peace imparts to consumption to levy upon it indirect contributions which it cannot furnish in times of war.

Besides, there may have been a political object in this temporary preference; for it should be noticed that the political changes which had taken place since 1789 had created about ten millions of landed proprietors; and that these proprietors, all of whose interests were attached to the revolution, formed a class which the government had particular reasons for sustaining, because that body of new holders of land was called upon to form a public spirit. The Emperor said one day in the Council of State: “The system of taxation is bad; under it there is neither property nor civil liberty; for civil liberty depends upon the security of property. It does not exist in a country where the vote of the taxpayer may every day be changed. One who has 3,000 francs in rent does not know how much will be left the next year for his subsistence ». 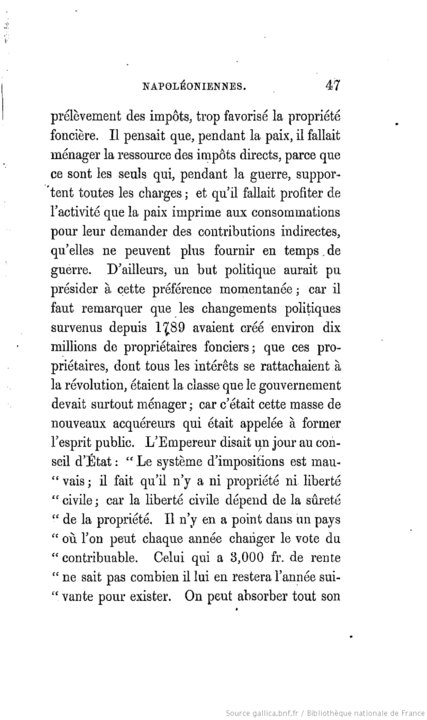 « The imposed tax may absorb his whole income. We see men, for a miserable interest of fifty or a hundred francs, make solemn pleas before grave tribunals, and a simple clerk can, by a single stroke of his pen, overburden you by several thousand francs! In such a state of things property does not exist. When I buy a piece of land, I do not know what I am purchasing. In Lombardy, in Piedmont, they have a land tax assessment book. Everyone knows beforehand what he must pay. The book is unalterable; changes are made in it only in extraordinary cases, and after a formal judgment. If the levy is increased, everyone bears his share according to the book, and he can make his calculations in his office. One knows what he has; and he has a property. Why is there not public spirit in France? Because a proprietor is obliged to court the favour of the administration. If he stands ill with it, he is ruined. Judgments upon reclamations are arbitrary; for this reason in no other country are people so servilely attached to government as in France, because property is dependent upon its favour. In Lombardy, on the contrary, a proprietor lives upon his land, without troubling himself as to who governs. Nothing has ever been done in France for property. He who will introduce a good law concerning assessments (cadastre) will deserve a statue”. 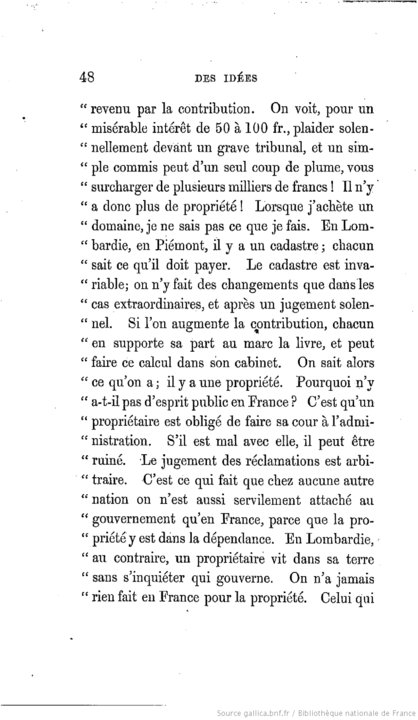 In 1810 the assessment register (cadastre) was put in operation in 3,000 communes; about 600,000 proprietors in those communes enjoyed the advantage of proportional equality.

Property in mines had never been regulated except imperfectly. In 1810 it was regulated by laws, and the Emperor created a body of engineers. 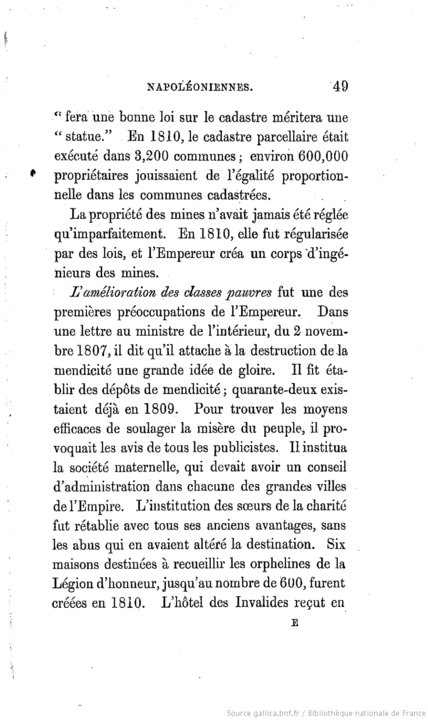 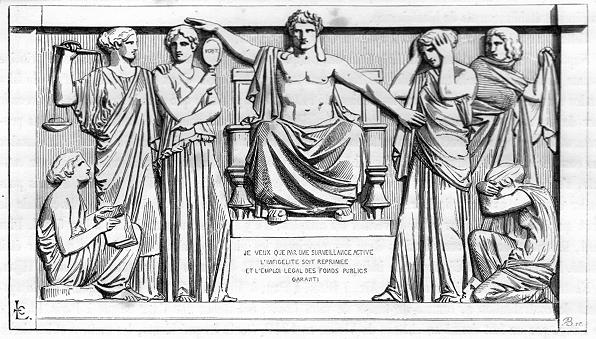 « I WANT, BY CONTINUAL SURVEILLANCE, DISLOYALTY TO BE PUNISHED, AND THE LEGAL USE OF PUBLIC MONEY ENSURED.»
(NAPOLEON THE GREAT, 16th of September 1807)